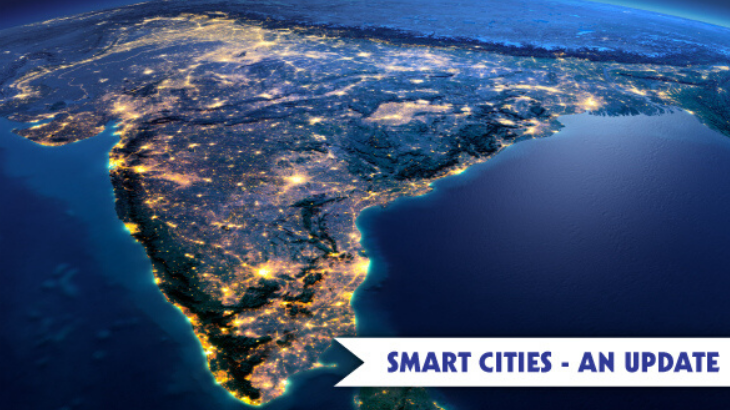 While smart cities topic has been covered extensively across forums, including ours; here is looking at where India stands. The Indian federal government under the leadership of honorable Prime Minister Narendra Modi initiated the ‘Smart cities’ mission in India two years ago for a cleaner and better India.

So where does the mission stand now? Here’s the update on the latest act of this clean up.

As per a report on the latest update of smart city project implementation, out of 731 smart city projects worth Rs 46,366 crore, work has begun only in 49 (6.7%), from which as of January 2017, only 24 projects (3.3%) have been completed showing a very slow pace. Work has not even begun in 40 cities; whereas 49.5% of projects are yet to begin. The states that have begun work are mostly the BJP ruled states such as Maharashtra, Gujarat, Rajasthan and Madhya Pradesh. Indore, Bhopal and Jabalpur have begun implementing about 20 projects out of a total of 159 projects and completed 12 only. Out of 49 projects targeted in Surat and Ahmedabad, work has started on 8 and completed 2. Udaipur and Jaipur have completed 3 projects out of 91. Non-BJP states include the implementation of 6 in 40 projects in Delhi (NDMC) while completing 4. Cities such as Nagpur, Surat and Vadodara have an Investment Conversion Rate (ICR) of 90%.

An important aspect in a smart city solution is that of technology-driven convenient financial transaction facilities which caters to going cashless for all transactions. This is being made possible in a new mall ‘Arvana’ in Udaipur where more than 90% of the shop owners have opted for payments through credit cards, debit cards or Paytm etc. taking a step towards technology and development. Also, the gated community of Palava City near Mumbai being developed by the Lodha Group by 2025 spanning 4000 acres is set to provide a smart card to all its citizens for cashless transactions for transport, retail centres etc. This smart card will also be the entry point for operating electrical equipments at homes or even for entering the building.

Larsen and Toubro has already begun the implementation of projects for making Nagpur a smart city. In addition to this, they have gone on to install more than 5000 cameras in more than 1500 locations across Mumbai for surveillance purposes. Henceforth, L & T intends to assist in the implementation of smart city projects in Pune, for enabling Wi-Fi across locations, setting up emergency call boxes, environmental sensors, video analytics integration, a revenue monetization model, and a state-of-the-art Smart City Operation Centre (SCOC) to integrate services across all platforms.

A new 2500 crore plan has been approved for Varanasi (which attracts around 65 lakh visitors every year), to revamp not only River Ganga and the VIP areas of the city, but also the old city around the river including areas in proximity to Kashi Vishwanath Temple. Rs. 1659 crore will be spent on area development while Rs. 618 crore will be spent on pan-city solutions leaving the rest for technical, administrative and other eventualities. Under this Heritage City Development Scheme, restoration of temples, buildings, areas near ghats and roads will be cleaned. Easy, safe and accessible movements, ensuring power and water supply, waste management and waterways projects, parks and parking spaces, cultural and convention centers, rejuvenation of bazaars, pathways, street lights, online payment of bills, utilities, e-booking of guides and other transportations systems, CCTV monitoring system, and optic fibre connectivity are just some of the smart solutions planned for Varanasi. Apart from central and state funding, Rs. 140 crore is coming from the PPP (Public Private Partnership) model, Rs. 1290 through various schemes, and Rs. 505 crore from the corporation’s resources.

Cisco has recently decided to set up Internet of Things (IoT) Innovation Hub at iCreate’s campus near Bavla, Ahmedabad, especially for startups that will develop IoT based smart solutions. Cisco will also be assisting in delivering a smart city project in International Finance Tec-City (GIFT), Gujarat which will boast of a unique District Cooling Solution data centre.

Schneider Electric India intends to partner with Naya Raipur Development Authority (NRDA) to develop the first ever green field integrated smart city project. Integration will occur in areas such as transportation, citizen applications, surveillance, end-to-end Smart Grid solutions, end-to-end Water Management system and integrated Building Management System. These will be connected through advanced analytics and other applications and services, thereby providing the Naya Raipur citizens a complete gamut of smart services such as better metered connections, safety etc. A new system known as the Command and Control Centre (CCC) intends to manage any other operations and emergencies in the city.

Due to diverse expertise and prerequisites required to commence projects, it takes a while for a large country like India to begin projects as per the time decided upon. However, work has begun in a few cities and shall in time move forward to create a smart ecosystem, improve citizens’ quality of life, and attract investments for further economic growth.