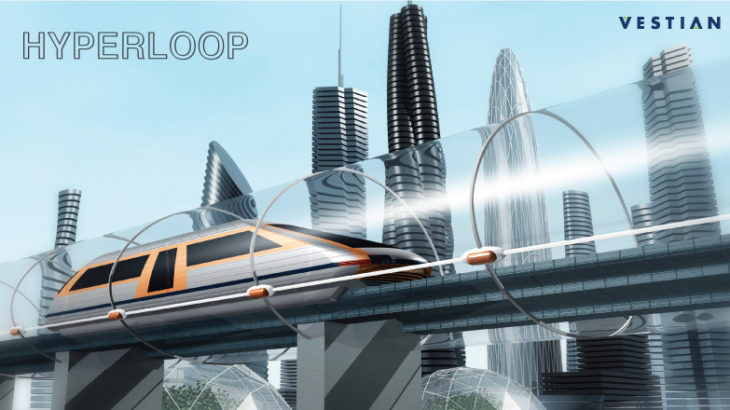 Ever thought of traveling from Delhi to Mumbai in 55 minutes, or Mumbai to Chennai in 50 minutes?? And we are talking of speeds greater than airplanes!!

Well, a distant dream as it may seem, but Elon Musk, CEO of Tesla and aerospace company SpaceX, believes it’s going to be a reality soon. His idea of ‘Hyperloop,’ the ultramodern transportation system, using low-pressure tubes, where magnetically levitating pods float on an air cushion (in these tubes) at remarkably high speeds, intend to drastically reduce the transportation time of freight and passengers by 80%.

Hyperloop’s first test track – The ‘DevLoop’ is located in the Nevada desert, 30 minutes on the outskirts of Las Vegas. Being constructed by ‘Hyperloop One,’ this cutting edge technology plans to get passengers from Dubai to Abu Dhabi in 12 minutes, San Francisco to Los Angeles in about 35 minutes, in maybe the next five years. Josh Giegel, Hyperloop One’s President of Engineering pronounces that they are selling ‘time.’ In the next three months, this 1600 foot or 500m (single tube is around 60 feet long) long tube that measures 11 feet (3.3m) in diameter will be set to test (public trail) with speed being around 760mph – in the first half of this year. Apart from Hyperloop One, Elon Musk’s idea has the backing from HTT, GE Ventures and Khosla Ventures.

But why is Hyperloop required in the first place?

With carbon emissions increasing and evidently causing harm to the environment, road, water and rail being the slower systems of transport, fluctuating prices and availability of oil make Hyperloop an effective and interesting concept. Also, Hyperloop tubes are designed to have solar panels on the roof for clean and efficient power generation and make use of regenerative braking and wind turbines in pylons for tapping on wind energy, even creating a surplus!

Proposals are on for Russia and Finland. Australia too is beginning to keep a close watch at Hyperloop to mitigate itself from the burden of immense growth especially in cities like Sydney and Melbourne. A journey that currently takes about three hours by a high-speed train would take less than an hour (50 minutes approx.) in a Hyperloop system.

What does it mean for India?

If signed by transport minister Nitin Gadkari keeping clearances and land rights primed, in 38 months Hyperloop could be a reality in India. It plans to carry 1.44 lakh passengers daily with a 40 second interval. According to Bibop Gresta, chairman of HTT, India would financially benefit from a Hyperloop – $1 billion than a bullet train – $12 billion. At a Make-in-India Karnataka conference, Gresta adds that it can get people from Bangalore to Mysore in just about 20 minutes, Bangalore to Chennai in 20 minutes, wherein this pod is probably an answer to the never-ending traffic jams in countries like India, China and Indonesia. Hyperloop One may begin operations in India by 2021, while combining it with the Make-in-India campaign where the material for building Hyperloop can be sourced locally.

How does Hyperloop affect Real Estate?

People may witness Hyperloop operating for freight and passengers by 2020, with a business meeting in Dubai and dinner at home in Abu Dhabi being a reality. Talks are on for self-driving pods till the Hyperloop portals (stations) which can be booked through a smart phone’s application. Does this seem that then it doesn’t matter anymore where one stays? Or if the distance from Manhattan to Scranton is reduced to merely 20 minutes, much of Brooklyn’s appeal for housing disappears? What about reaching from East Coast to the West Coast (California) in just about an hour? What if the travel distance got one from Amsterdam to Paris in 30 minutes? If Hyperloop becomes a reality, it would change the game of real estate. In the US, it could certainly mean that the demand for commercial real estate would witness a surge in low cost or low tax areas as businesses would shift to these locations which would be the opposite for high tax locations. People would not find it hard to balance home and work place. For residential real estate, people would move closer to nature and coasts. A great example would be of people moving to San Diego for its weather while working in South Dakota. Again, real estate costs would be higher in places close to Hyperloop’s terminals as these could be hosting shopping areas and eateries too.

The negatives attached are enormous too. Twists and turns to be taken between cities, adjustments to be taken care of in elevation, vulnerability to earthquakes (for which the tubes are being mounted on pylons placed at a distance of every 100 feet) need to be taken care of. The exorbitant costs associated with the construction of this transportation may eventually make it feasible for only businesses to use it. Or rather would a ticket under $100 make it economically feasible to cover all the maintenance costs of Hyperloop?

Technology is certainly revolutionizing the way we live. But with transport systems already in place, where will Hyperloop fit in between cities? And would the pricing be viable enough for the common man en masse? Hyperloop seems a idiosyncratic actuality but currently a little far-fetched, till it in-reality exists.