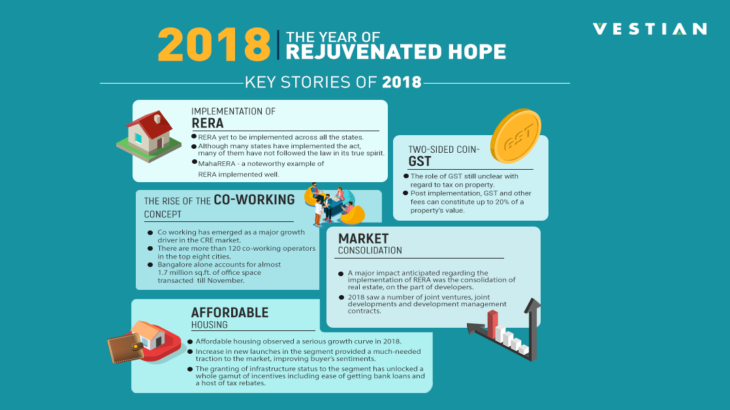 With high expectations from 2018, it was anticipated that the teething problems around policy initiative introduced in 2017 (RERA and GST) would ease out by the end of the year, bringing a new order of transparency and efficiency. Belief was, while GST would provide an audit trail for better control and monitoring, RERA would ensure timely delivery of residential projects, boosting buyer confidence and bring back positivity to the market. There was also the likelihood of a deliberate shift in focus towards building more affordable homes or projects with smaller configurations, leading to a reduction in the overall ticket size. Furthermore, a robust office market coupled with positive economic growth of the country and improvement of infrastructure were expected to infuse positive buyer and investor sentiment into the real estate market, abetting its growth in 2018.
The Way It Unfolded…
A few major trends that emerged strongly during 2018 were the co-working sector, as well as the rise in affordable housing.
Here is a look back at the key stories of 2018:
The RERA report card – RERA has long been touted as a game changer for the real estate sector since its inception in late 2015 and went to become an Act in early-2016. It was heralded as a measure to boost buyer confidence and ease the home-buying process. RERA rules and provisions came into effect in May 2017 with the deadline set for all developers to register themselves under RERA by July 2017.

A year down the line, some of the Indian states are yet to notify RERA rules. As of November 2018, Arunachal Pradesh, Mizoram, Meghalaya, Sikkim and Nagaland have not notified the Rules, owing to certain constitutional challenges as the land in these states are community owned. While the other states have fallen in line, many of them have not implemented the law in its true spirit, failing to notify a Permanent Regulator, Appellate Authority or a website. Out of the states that have implemented RERA, many have diluted the key provisions of the central Act. These dilutions include exemption of majority of under-construction projects from RERA’s purview as well as easing penalties for builders who do not comply with the Act. Thus, it is inferred that while RERA has been implemented on paper, it will take years for RERA to make any significant impact on ground. However, in the interim, there has been positive news as well. The Maharashtra regulator or MahaRERA has been exemplary regarding a fast-tracked redressal mechanism, restoring buyer sentiment in under construction projects and delivering some judgements within 30 days of filing a complaint. Other states like Telangana have decided to study the implementation of RERA in Maharashtra to replicate its model while Karnataka has started moving in a similar direction with prompt rulings in several cases.

Market consolidation – One of the major impacts anticipated of RERA was the consolidation of real estate. It was expected that smaller realtors would find it difficult to sustain and will eventually opt for consolidation. Strict rules would push unbranded and debt-ridden developers to forge alliances with larger, corporate developers with deep pockets. While it created palpable stress amongst the smaller developers, this development was a welcome move in the long term and 2018 saw a number of joint ventures, joint developments and development management contracts. These ventures gave hope of improving buyer confidence as buyers are more comfortable in dealing with bigger, well-known organised entities with a long-term stake in the business. Moreover, consolidation today is viewed as a potentially lucrative business opportunity for both corporate entities and newer entrants for growth and expansion. This development is particularly gainful for cash-rich corporate developers that already operate in other heavily-regulated sectors and are familiar with such rules.

GST – bane or boon? The jury seems to be still out on this one, even after over a year of implementation of the GST. Where previously a service tax had to be paid for under-construction properties, now GST has to be paid for the same. The effective rate of service tax was 4.5% of the property’s value, while the effective rate of GST is 12% with inputs tax credit (ITC). Though the tax proportion was expected to be lower, after taking ITC into consideration, there is still confusion about the amount of rebate that a prospective homebuyer is entitled to on the back of the pass-over of ITC. Moreover, after buying a property, the buyer has to register it by paying stamp duty and registration fee, in addition to paying the GST. Stamp duty is levied by state governments and usually varies between 5-8%, thereby implying that GST and these other fees constitute up to 20% of a property’s value. Till now, the role of GST has been observed to be limited with a majority of the year passing in clarification about the applicability of GST on properties and buyers remaining more concerned about delivery timelines and quality of the completed product. Going forward, it will be interesting to see if developers pass on the full benefit of the ITC to the buyers.

The rise in co-working concept – The concept of co-working has changed the perception of a workplace today, leading the commercial real estate market to explore a new era of shared workspace. India too has caught up with this phenomenon and is witnessing a proliferation of start-ups and SMEs, buoyed by the government’s concerted efforts to create a sustainable ecosystem for entrepreneurs. This has provided a perfect platform for co-working business centres to cater to the office space needs of these start-ups. At present, there are more than 120 co-working operators in the top eight cities. The quantum of office space demand from this segment in the key cities of the country has strengthened significantly in 2018, with Bangalore alone accounting for almost 1.7 million sq. ft. till November 2018.

Affordable housing to the fore – While there were no drastic changes expected in the residential sector in 2018, the number of new launches increased significantly in the affordable housing bracket, providing a much-needed traction to the market. Furthermore, the government’s initiative – ‘Housing for All by 2022’ provided a boost to most developers who were deliberating their entry to the affordable housing segment. Another factor that worked in its favour, was the granting of infrastructure status to the segment, thereby opening up a whole gamut of incentives including ease of getting bank loans and a host of tax rebates. Today, the segment holds the key to unlocking inventory and has turned into a strong and lucrative avenue for generating profits, reducing the demand supply gap, besides providing for a rewarding business proposition. The Centre’s move to increase the carpet area for residential units eligible for interest subsidy under the Credit Linked Subsidy Scheme has also come as a boon for the affordable housing sector. The new rule will cover many ongoing projects under the Prime Minister’s Awas Yojana and expand the market size. Thus, buoyed by the various tax benefits and incentives associated with these policies and schemes, affordable housing observed on a serious growth curve in 2018.
On retrospection, the year 2018 has seen a fair amount of hits, thereby renewing hope for the revival of the real estate sector, while observing a few misses. The period lived up to its expectations of creating positive sentiment in the market, post a challenging 2017. For the major part, a good momentum was witnessed in the office market and the affordable housing segment, signifying the beginning of a new realty landscape in the country. Additionally, International Monetary Fund, and the World Bank have retained India’s growth forecast for the current year at 7.3%, thus maintaining their expectation of India as the fastest-growing major economy, well ahead of China. This further augments the country’s potential to attract investors and bodes well for the country’s realty market.