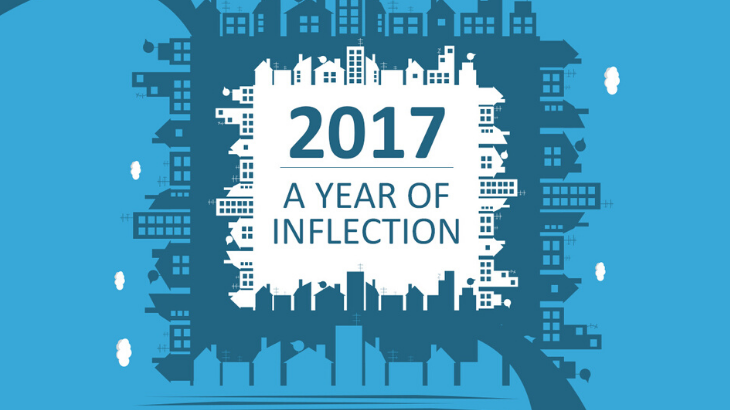 India’s real estate sector witnessed one of the most trying periods of all time in 2017. On the real estate timeline, the year shall be hailed as a major milestone for the sector in more ways than one, given the number of policy reforms introduced during the period. This year shall also perhaps go down in real estate history as the period that observed severe constraints across the country in the wake of a new regulatory environment. And yet, 2017 was also a year of hope for the sector.

The year began amidst turbulent times with the introduction of demonetization just a month prior. This led the industry into a state of turmoil, given the cash crunch in the market, and it was expected that it would take at least two quarters for the dust to settle down.

While the industry waited with bated breath for the market to stabilize post demonetization, the deadline for implementing the Real Estate (Regulation and Development) Act 2016 (RERA) was announced as May 2017. Another reform, the introduction of Goods and Services Act (GST) Act in July 2017, came in quick succession.

The primary issue concerning these policy reforms was the lack of clarity on how they would impact the country’s real estate sector and the buyers/investors thereof. This has had a profound bearing on all stakeholders, as property markets are largely sentiment-driven. Consequently, residential markets were severely hit with new launches getting constricted to dismal numbers and the market witnessing a downward trend in the sales of housing units. The luxury market was affected the most, and the number of launches dropped considerably in this segment.

While demonetization had led to a massive cash crunch, resulting in project completion delays, the RERA compliance exercise turned complicated for many. The tax reform of GST, too, led new launches to dry up further in the market while increasing the number of fence-sitters who awaited a clear verdict of GST on real estate – whether it would aid the home buyers by bringing down prices, or lead to an increase in prices.

Meanwhile, property prices remained largely stagnant across the markets in 2017, although a few locations holding a large quantum of unsold inventory did witness a slight decline, as developers vied to offload their inventory. Industry stakeholders opined that by the year-end, the slowdown in property launches and sales would ease out and things would start improving with the obliteration of benami property holders, reduction in bank interest rates and implementation of RERA by the states.

However, by the end of 2017, things did not turn out as expected, owing primarily to the fact that these policy changes are extensive and complex in nature and require time to impact the real estate industry. Although the effect of demonetization gradually receded to some extent, RERA compliance has taken its time. While RERA came into effect on May 1, 2017, exactly a year after it was passed by Parliament, till now not all states have established a permanent Real Estate Regulatory Authority. This has led home buyers to maintain a wait-and-watch policy, thereby prolonging the slowdown on residential sales. Meanwhile, RERA approvals are also taking longer than expected, to come through, thus keeping a check on the number of launches. On the GST front, the jury is still out on whether prices are going to come down. There are deliberations going on over the tax slabs to be levied and the present rate of GST of 18% on under-construction properties, might change.

However, despite the adversities that obstructed residential real estate growth in 2017, there were developments that brought about cheer to the sector as well. Office space absorption continued to remain robust across the country and Bangalore maintained its position as the city with the highest office space absorption. Today, there is hope on the horizon for ‘housing for all’. With the Union Budget 2017-18 having emphasised the importance of housing, according infrastructure status to this sector, things are expected to change for the better. Given the benefits offered in the budget, the clearer definition of affordable housing in terms of area, relaxation of construction timelines for affordable housing projects, and tax incentives, the country’s demand for housing has a fair shot at meeting its corresponding supply in the near future. Meanwhile, the nationwide scheme of Pradhan Mantri Awas Yojana (PMAY), launched in 2015 with an ambitious vision of providing affordable housing solutions for all Indian citizens, approved an increase in the carpet area of houses for the two-middle-income group (MIG) categories, in November 2017.

The World Bank has stated that India’s GDP may slow down from 8.6% in 2015 to 7.0% in 2017 owing to disruptions caused by demonetization and the GST, concurrently noting the fact that India is gradually recovering from the interim adverse effects of demonetization. However, India’s macro fundamentals have improved considerably in the past 39 months, which makes it easier for the economy to absorb the adverse impact of potential external shocks compared to other emerging market peers. Thus, strong fundamentals, political stability, controlled inflation, lower interest rate regime and increased emphasis of the Government of India to resolve structural bottlenecks would be instrumental in observing a resurgence of the real estate sector in the coming period. On a positive note, India has risen by 30 places to gain the 100th place on the World Bank’s ranking of countries by Ease of Doing Business, driven by reforms in access to credit, power supply and protection of minority investors.

On retrospection, the year 2017 has turned out to be a period of inflection, with the industry observing a comprehensive shakedown. It has been compelled to take cognizance of the fact that it can no longer work as an unorganized sector or on unscrupulous terms. Today, as we prepare to welcome the new year, industry stakeholders are of the opinion that the heartburn that was witnessed in the sector in 2017 as a result of various policy reforms would eventually fade away, with the reforms strengthening its foundations and transforming it into a robust, transparent and prosperous industry.