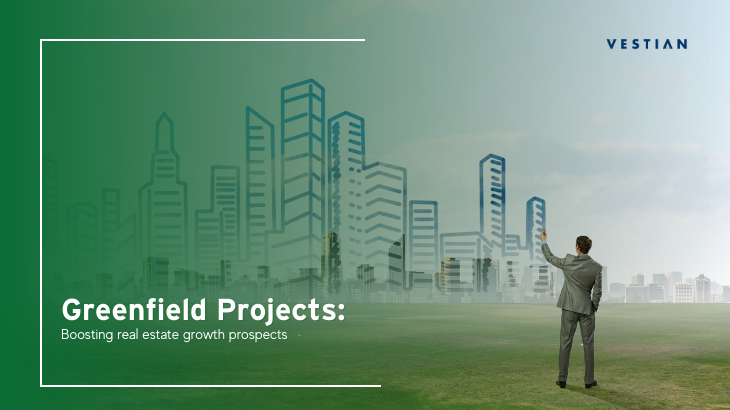 A key factor today driving business value of any company is its workplace proposition. Companies have always been on the lookout for quality office space that provides a conducive working environment. This has further been consolidated post conclusive research on how a good workplace is crucial to improving productivity and efficiency of employees; and post pandemic this emphasis coupled with the focus on employee health and well-being has led many a firm to revisit their workplace strategy. As such, it has become critical to understand the type of space that creates and enhances the physical workplace.

Conventionally, organizations prefer occupying workplaces in brownfield projects in established commercial zones, renovating the space as per their needs. These projects usually have limited development scope and are characterized by low vacancy rates and high rentals owing to the prime location. Occupier preferences, however, are set to change, as employees return to their offices post the pandemic. Led by the growing need of employees to stay closer to their residences, companies are no longer compelled to seek workplaces situated in core business districts. They are now more focused on providing spacious and convivial conditions which are often difficult to implement in most brownfield projects due to their existing structures. This has led greenfield projects to emerge as a fitting solution.

Versatility in design and build that a greenfield project affords, makes a strong case for its viability in the current scenario. Apart from that, the kind of customization, based on a company’s present and future demands, employee satisfaction and efficiency focus, the possibility of building sustainability into the design at inception of the project, make it an option worth considering. . Not being restricted by any past buildout, it enables architects and developers to be more enterprising and creative. The freedom of need-based design and construction, coupled with the option of future expansion, make it an attractive option for occupiers and investors alike.

Another advantage is the connectivity of such projects with the key residential and business districts in a city. While the scarcity of contiguous land in cities impels greenfield projects to be planned in the outskirts, the sites selected are considered based on their ease of accessibility and room for expansion in the future. In specific cases, development plans are determined by relevant authorities for large greenfield projects that mandate minimum road widths, infrastructure, and public amenities. Thus, over time, these greenfield projects hold the potential of developing the community in the region, bringing in a wide range of social and physical infrastructure as well as economic growth by way of commercial traction.

There are challenges to this kind of development too, the most noticeable being the ecological impact/consequence as well as the time taken to complete the project owing to its significantly longer construction stage. While the absence of existing assets on the site is an advantage in greenfield sites, it also calls for the developer to apply for proper government approvals and procedures, to avoid any delays to the project on account of lack of proper documentation.

Another challenge is the cost of capital involved. A greenfield project should commence from the foundation onwards and there are various permits and licenses to be obtained. Generally, a supporting ecosystem is expected to be constructed alongside the proposed project in order to have the desired operational outcome. All these factors cause a surge in the development cost of the project.

Having said that, the move toward greenfield projects presents a huge opportunity for commercial real estate in India as it has an abundance of land for potential greenfield developments. The Indian Railways is the biggest landlord in the country followed by the Ministry of Defence. The railways alone own around 4,780 sq km of land, of which more than 430 sq km is vacant. The Rail Land Development Authority has been entrusted with around 125 sites, these vacant land parcels holding immense prospects for greenfield development. While focus lies on construction of residential spaces around the railway stations, the eventual aim is to enhance the economic viability of commercial development as well.

Another opportunity lies in the development of proposed greenfield smart cities in the country. The GIFT City and Dholera Industrial City are prime examples of how a greenfield project can boost commercial and industrial traction in the region. These projects provide the necessary infrastructural needs for companies looking for workspaces, thus also enhancing the commercial real estate market. Moreover, such projects being located in city fringes carry the prospect of creating new office markets or growth corridors that can later compete with the established business hubs on the grounds of quality workspace and facilities available.

Thus, as we move towards a sustained growth in the real estate sector post the pandemic-led adversities, the focus is gradually expected to shift to greenfield projects. Harbouring uncharted potential, such developments hold the key to determining how the built environment shapes up in the country. With an increasing number of companies today inclining towards modern architectural trends and built-to-suit projects, the commercial real estate market stands to benefit greatly from greenfield projects, creating newer growth corridors in the near future and boosting real estate growth in the country.