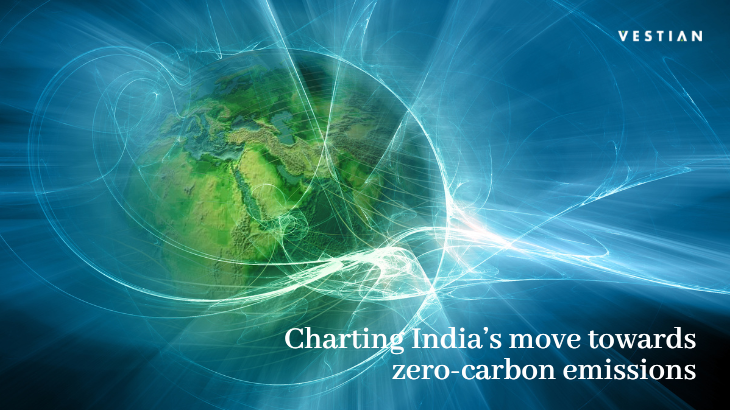 The 27th Conference of Parties (COP27) is currently being held in Sharm el-Sheikh, Egypt. Touted to be amongst the largest gatherings of climate stakeholders ever at a COP, world leaders have gathered to discuss key areas such as climate disasters, climate funding, and green energy. Worryingly, several events this year have heightened climate change concerns, such as the unprecedented melt of Swiss glaciers, record-breaking heat waves in China, a shorter spring witnessed in India, and hurricane Ian devastating parts of Florida, amongst others.

The main theme of COP27 is the implementation of the Paris Agreement and there are expectations abound regarding the outcomes of COP26 around the finalization of the Paris Rulebook, particularly on the global carbon market. At the COP26 summit, India had pledged to achieve net-zero emissions by 2070 and reduce its carbon intensity by 45%, by 2030, as compared to 2005 levels. Let’s take a look at the progress so far.

According to International Energy Agency estimates, it is assessed that India will need USD 160 billion per year to meet the 2030 clean energy targets, and no other country will have such an increase in energy demand than India in the coming years. Further, as per McKinsey estimates, India may need USD 7.2 trillion of green investments until 2050 to decarbonize in the Line-of-Sight scenario and an additional USD 4.9 trillion for the accelerated scenario. Keeping this predicament in view, India has made many of its carbon emission goals conditional on receiving financial help.

Thus, given the quantum of funds required and the strain in acquiring funds, the key issue at the COP27 would be regarding climate finance and how this should be disseminated. India has also been seeking that the USD 100 billion-a-year pledge of climate funds for developing countries be re-assessed – a demand that has not yet been fulfilled, despite being two years past its deadline. With the European region and the US accounting for the majority of CO2 emissions, the wealthy countries would be looked at to provide succor to climate funding.

Renewable energy on track, but far behind on the green energy front

To deal with the challenges of climate change, India had presented a five nectar elements strategy called Panchamrit in COP26, for a greener India, which included:

The initial two commitments seem to be on track as India is adding new renewable capacity at a faster rate than any other major economy, including China. The country is already meeting 25% of energy requirements from renewables, and at this pace one billion ton of carbon reduction may not be out of reach, as we expect to shift to electric mobility more rapidly. However, India, along with much of the world, is still struggling with the green energy aspect, striving to provide energy for its 1.4 billion population by way of cheaper fuel like coal to meet its immediate needs. Also, the goal of limiting global warming to 1.5°C seems unlikely to be achieved, as according to IPCC, there would only be 50% chance even with a vision of cutting down 17-20 billion tons of greenhouse gases by 2030.

COP26 conference emphasized the benefits of accelerating zero-emissions transportation. The Glasgow Declaration on Zero-Emission Cars and Vans (ZEVs) was signed by over 100 parties who agreed to support the transition. India, represented by NITI Aayog, also signed the COP26 declaration on the accelerated transition to 100% zero-emission cars and vans.

Amongst various initiatives, NITI Aayog has been collaborating with the UK government on e-vehicles, charging infrastructure, and battery storage, to boost low-carbon infrastructure. India is the world’s fifth largest and fastest-growing vehicle market, providing massive potential for electric vehicle uptake. The shift to ZEVs is fast underway, driving down technology costs, and reducing our reliance on imported fuels. However, India largely moves on public transport – the most affordable and essential means of transport, thus it would have been prudent to focus on reducing the carbon footprint of such transport as well, along with cars and vans.

While the commitment to achieve net zero emissions by 2070 seems to be a long way off and will require a greater push, specific initiatives undertaken by the government and key real estate players to minimize the issues of climate change are worth mentioning. Notably, Indian Green Building Council (IGBC) is working closely with the central and state governments, World Green Building Council, and bilateral & multilateral agencies in promoting green building concepts in the country. IGBC has also set its target to net zero carbon buildings by 2050, in sync with India’s net zero carbon emission commitment. A few leading developers have also taken steps to reduce the environmental impact of their businesses by announcing intentions of going carbon neutral and registering projects under suitable IGBC Green Residential Buildings Ratings. This would lead to a wide-scale transition towards renewable energy, focusing on material efficiency and circularity.

The growing consensus regarding climate change notwithstanding, there is a funding gap that needs to be met by international climate public financing to attract investors in the renewable energy domain. Without adequate financial support, the aspirations and objectives for confronting climate change issues could be futile for most developing nations.  Nevertheless, India should continue to take timely actions and monitor implementation of various initiatives taken towards zero-carbon emission.  India would further need to come up with short-term and long-term strategic plans in order to fulfil its commitment. More importantly, the country’s net zero targets would have to be aligned with various key sectors, by way of formulating policies that support climate-related endeavours in these sectors.

Eventually, the implementation of climate action plans by developing countries like India is dependent on climate finance and technology transfer, with their political economy playing a major role in ensuring positive development. Till then, we look forward to the discourses in COP27 and work towards bringing about efficient climate mitigation.